In order to use the membership functionality of The Ski System, please allow cookies. 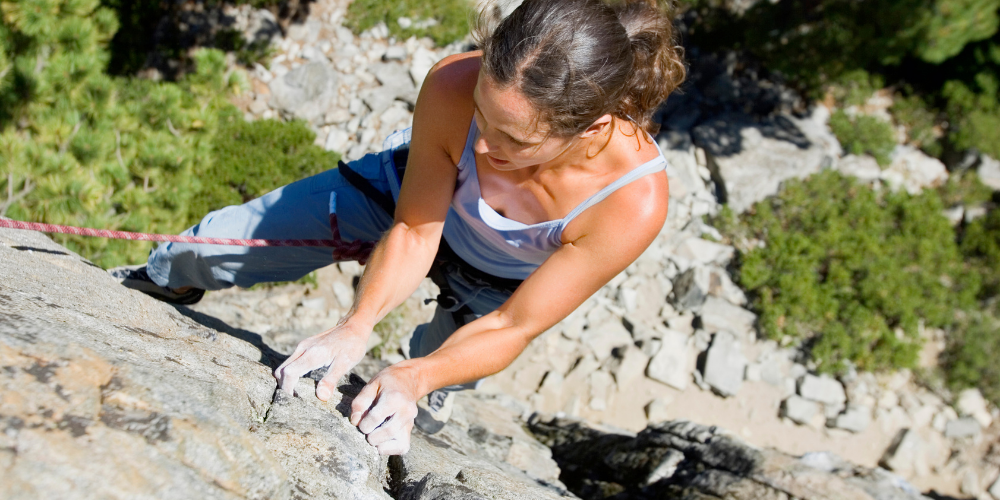 Let me start by saying that this website was designed specifically to solve the problem I’m about to present. I’ve constructed each of the available training programs from scratch to produce different desired outcomes that skiers may want. If you want to ski more aggressive terrain, there’s a program on this site for that. If you want to ski faster, there’s a program that caters to the demands that speed places on the body. If you want to ski longer, there’s a program for that. All this to say that The Ski System is here to solve your strength and conditioning needs during the off-season, and your strength maintenance needs during the season. So how else should we spend our time if we’re not training or skiing? Great question! Originally I answered this HERE.  Today we are going to unpack a sport that may not appear on your radar for potential cross-training activities: Rock Climbing. Typically sports that only involve going up seem in opposition to skiing considering how much time you spend going downhill. Your eyes, body, and reactions all happen in response to things coming at you quickly whereas rock climbing is much more methodical and patient. So should skiers actually be spending any of their training currency on rock climbing hours? Let’s find out.

The Sport of Climbing

Let’s first start by assessing what is going on in the body as a climber is climbing. When someone begins to ascend the face of a wall, there are myriad different concepts to consider. What route should they take? What limbs will they have to rely on most readily? Which finger or full hand holds will they use? What risks will they have to take to overcome specific obstacles? Perhaps the climber isn’t actually thinking of each question by itself, rather they arise as the ascent begins.  Once underway, the climber will begin to experience a steady degree of incremental fatigue as the body must rely on predominantly isometric contractions (contractions in which there is no change in the muscle), as well as concentric and eccentric contractions when moving position.  The predominance of these three contractions make climbing challenging because you must possess decent muscular endurance as well as a good strength to weight ratio, when bouldering, and proficient full body strength and mobility when climbing in a harness.

Aside from the muscular activity, climbing also requires that you face your fears as each risky maneuver has a positive payoff (you make the next hold), and scary downside (you fall). Falling can be scary for any climber even if you have support from a harness or a crash pad below your bouldering route.  Falling can be terrifying and we as humans aren’t designed to fall particularly well compared to other species such as birds, who can decide to fly, or cats, who seemingly always land on their feet. Humans are awkward, and weigh quite a bit, so each additional foot you are above the ground presents a disproportionately increased risk.

What’s unique about climbing in contrast to skiing is how your body is always sharing responsibility of the maneuver from finger tip to toe. Your opportunities for leverage are focused to twenty contact points, ten of which are encased in a climbing shoe so you technically only have twelve. With every maneuver, you’re required to leverage these contact points to align with your field of vision, produce a joint action, and arrive at a new hold or destination. This my friends is where climbing becomes quite applicable to the sport of skiing. Let’s consider skiing and then I’ll bring these all together at the end.

The Sport of Skiing

Here’s some truths about skiing: it involves changes in speed, direction, friction, gravity, and force.  That means that your body must be in a stable enough position to respond to all these factors at once without losing balance or control.  If you become incapable of managing these elements while you travel down the hill, you fall, or worse, collide with another skier.

Skiing is predominantly isometric in nature. Your legs tend to hold a flexed knee position loaded in the textbook “stacked” ski stance. Here, your shoulders line up above your thighs, hips slightly back toward your heels and knees driving forward toward your toes, all while you maintain a shin angle that is aggressive enough to keep edge pressure and therefor control. Even if the pitch of the hill were to change, it’s unlikely that your body position will adjust so much that you begin performing a full range of motion squat (one that involves both concentric and eccentric contractions). However, if you were to jump, make a very aggressive carve, or land coming out of the air, you would utilize more range of motion to stay upright. That’s why training full ranges of motion under stress (loading/weight) is tantamount to your success on the hill.

As you may know from reading this blog or following The Ski System on social media @theskisystem , Proprioception is a key contributor to effective ski mechanics and season-over-season progression. Proprioception is defined as the ability to sense movement, action, and location. Knowing where your body is in space and what it’s doing as you go down the hill opens up a world of possibility because it promotes body control and thereby allows you to manage skiing more difficult terrain at increased speed.  Without good proprioception, you will have a hard time mastering new ski mechanics, slowing down, speeding up, or leaving and landing back down on the snow. Here’s where you can begin to see the intersection of rock climbing and skiing.

We know that skiing and rock climbing may not align entirely when it comes to the forces acting against you during the activity. However, they are quite similar. Skiing involves changes in speed traveling downhill, pitch, friction, gravity, and direction. Climbing involves changes in speed traveling upward, direction, gravity, pitch, and friction.

The key difference is direction (upward versus downward) but not every cross training activity needs to mimic the sport of skiing 100%. That’s why we use the gym to supplement specific areas of demand.   The key factor that climbing will promote, which will undoubtedly be utilized every day on snow, is proprioception. Rock climbing has a unique ability to build proficiency, or improve preexisting proficiency of by better controlling your body and its actions through space. To become a more skilled climber, you must become autonomous in your limb movement. Your joints and muscles must find holds and pressure that may lay outside your field of vision. Similarly, you must be able to react to changes in your environment without being able to see them clearly as you rocket down the hill.

When your skis hit an unexpected bump in the snow, you must internally respond to that by mastering your position in space and calling upon the muscles necessary to stabilize your body without having to “conjugate the verb” so to speak.  Just do it! Don’t think about it. That’s what rock climbing creates. It challenges our body, our strength, our endurance, and ultimately our brains ability to utilize all our available weapons. If you spend a summer strength training and rock climbing, but did nothing else, you would find yourself primed and ready to charge next ski season. You would build muscular endurance, maintain isometric strength throughout your whole body, improve hand-eye coordination, and harness proprioception. That’s not to mention the core strength and stability you would develop by increasing the difficulty of the routes you climb. Climbers and gymnast both possess some of the most dynamic and stable cores in any sport. They can leverage their entire body through trunk stabilization. Skiing needs a stable trunk to allow the lower extremities to move like pistons without ruining body position. For this, climbing is king.

So, long story short. Climb. Climb often and climb with fiends. Climb fast on easier pitches and slow on tough pitches. Build variance in your abilities, and most importantly, pair your climbing efforts with strength training programs designed for skiers!